Moving from Williamsburg VA to Richmond VA in the late summer of 1992 was a real culture shock.  Homeless people!  Gunshots!  Left-wing politics!  For me, the biggest difference was in the bands.  In Williamsburg, you'd get a couple of your friends together and play in your parents' garage.  In Richmond, you had to actually be GOOD.  Like, for example, Damn Near Red.
One of the first big shows at the Metro that fall was (I think) Shudder to Think, First 5 Thru, and Damn Near Red.  For some reason I feel like Askance was going to play, but they refused to play a show that cost more than $5.  Maybe it was First 5 Thru that refused.  This completely boggled my young mind.  Why would a band refuse to play a show because it was over $5?  Phrases like "veganism" and "privilege" and "feminism" were completely alien to me then.  Anyway, this guy Brian Moeller (sp) was a blonde art student that wore trenchcoats and went on about the band Damn Near Red.  They typified something called "the Richmond sound" - whatever that was.  I made sure to catch them the next time they played, and was blown away.
I was unaware that bands could have dynamics and contrast and... melodies.  The singer looked like she was born on stage and was singing Latin opera over shoegazery feedback swirls. They had a ridiculously tight yet jarring rhythm section that was just as important as the rest of the band - again, a new concept for me.  I saw them whenever I could and was amazed when I eventually became friends with the bassist and the singer, as I always figured they would be way too cool to consort with the likes of me.  One of my favorite live music experiences was watching them cover Pat Benetar's "Heartbreaker" in someone's basement in front of maybe 30 other people.  Great band.
Some time in the mid 1990's, they recorded with the legendary Mark Smoot: 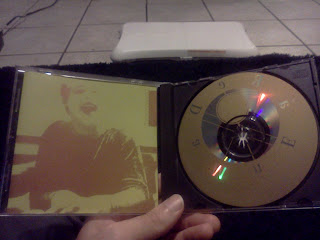 01 Crusted with Angels
02 Bread of Heav'n or Cutting
03 The Ardent One
04 Full-Throttle Chelsea
05 River Blindness
06 Hey Fabulous
07 The New Onion Persona
08 Regilding the Dome is Brilliant
They also recorded a few songs with David Lowery, but for legal purposes I can not post them.
Posted by David DiDonato at 7:08 PM