In the summer of 1997, my independent rock band Secret Girlfriends hit the road for a month-long tour of the USA.  A very unwise move, as (a) we had no following - even locally (b) we had nothing released except for a couple of screen-printed t-shirts and some self-made cassettes.  However, like most moves that are considered "unwise", I wouldn't have traded that experience for the world.
I don't know what it's like any more, but there used to be a time where you could scour the classifieds in the newspaper for a $1000 Ford Econoline, and take your band on tour.  It was hard to spend more than $3 on a full meal at Taco Bell, and gas used to be $1 an hour.  You'd play at a club, or at a house party if you were lucky.  You'd stay at a hotel, or on someone's floor if you were lucky.
On this particular voyage, one band that really stood out for me was the one we played with in Austin, Texas.  They were called Zulu as Kono.  Our route up to that point took us from Richmond, VA up north, then to the Pacific Northwest, all the way down the coast, and through the desert.  My dad and his wife lived in Austin, so we had a place to stay.  Maybe that had something to do with it, but I felt very at home in Austin.  Lots of like-minded people.  I don't remember where the show was, but I do remember it was at a house party.  I also barely remember Zulu as Kono except for the fact that they either had 2 bassists or 2 drummers or 2 guitarists and played this crazy/controlled kind of mathy Fugazi/Shellac rock.  I talked to someone in the band afterward, and traded information with him and learned that their name (if memory serves) was taken from the credits of an old episode of Hawaii Five O.
2 years later, Zulu as Kono toured the USA, probably the same way my band had 2 years previously.  I got to return the favor and got them a show at Hole in the Wall at Richmond.  As with our show in Austin, there were maybe 20 people there.  It's crazy to think of doing something like that now... mortgages, car payments, wives, kids, jobs.  Where was I?  Oh yeah, I got their album. 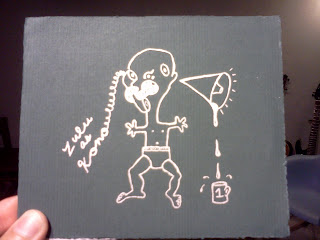